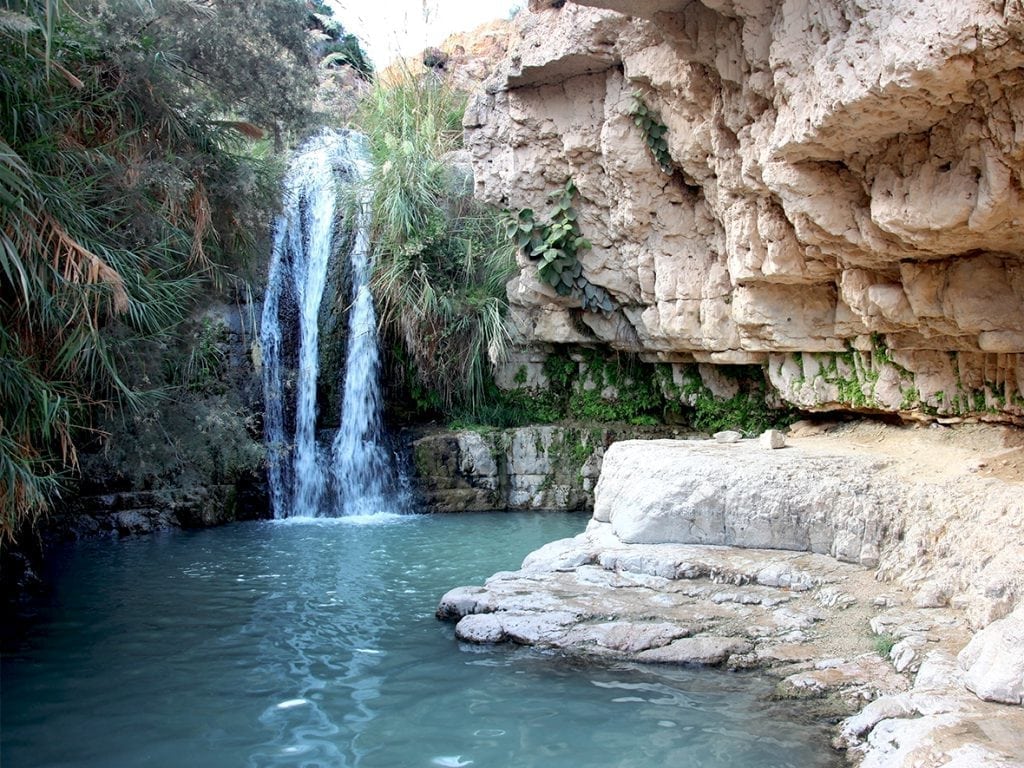 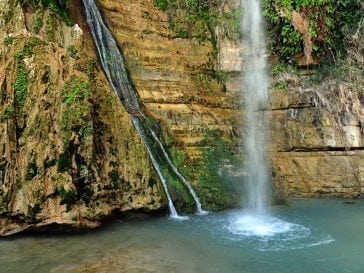 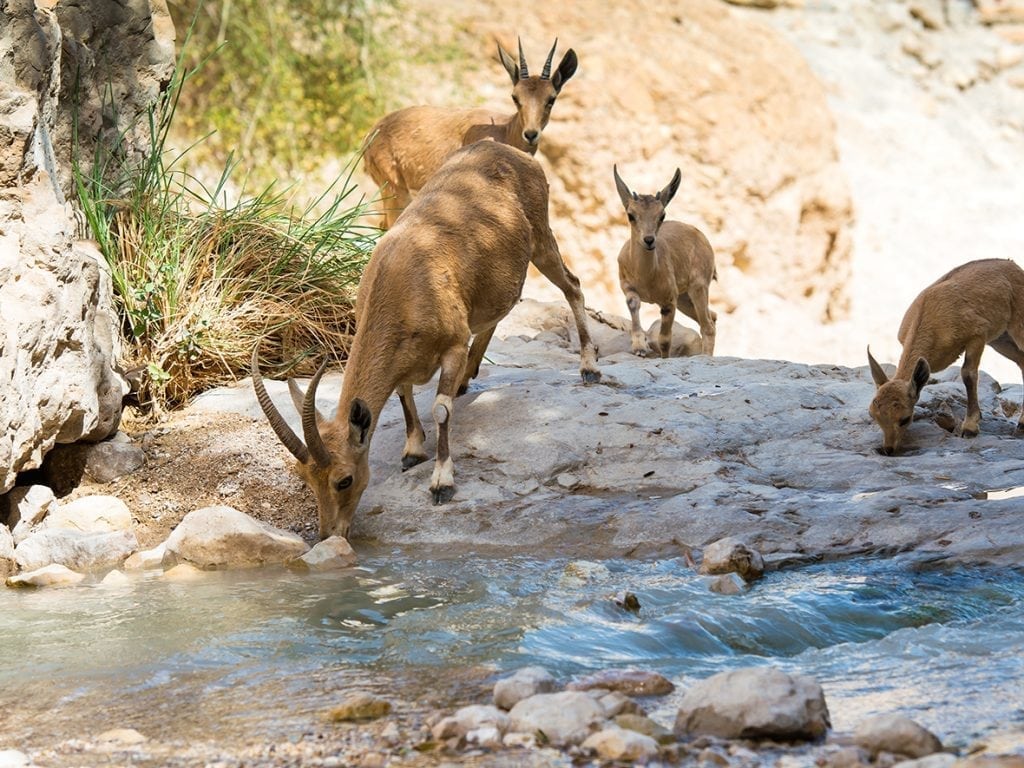 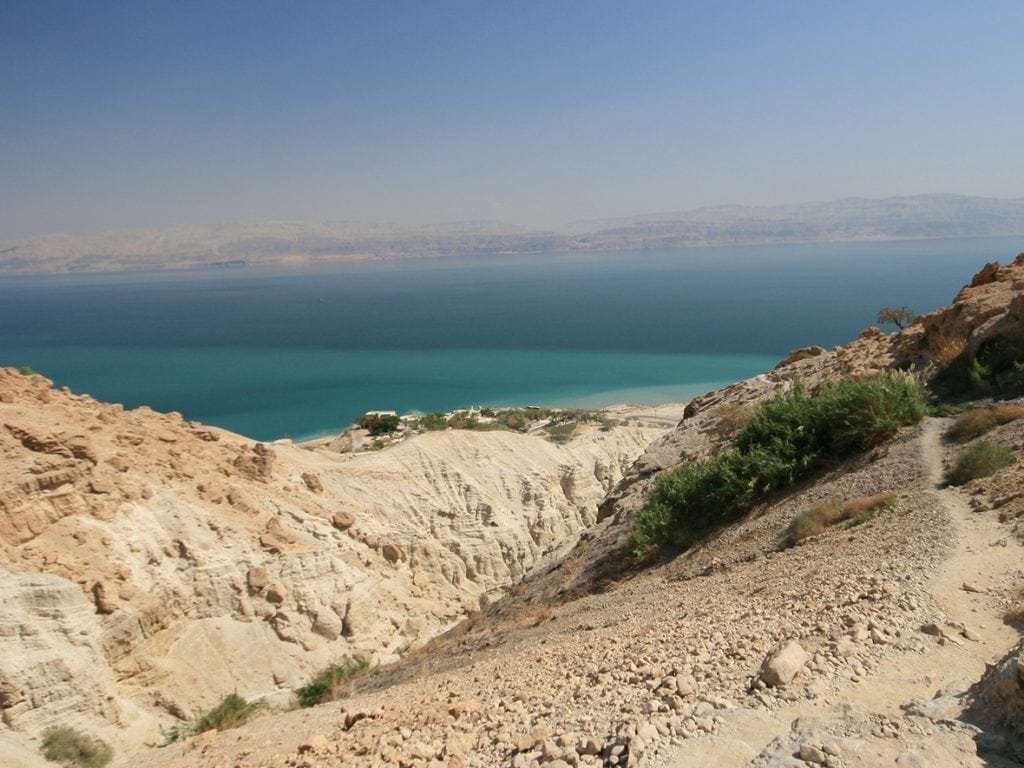 The name Ein-Gedi (or En Gedi) is mentioned for the first time in the Old Testament (Joshua 15, 61) among the list of the six desert-cities in the domain of the tribe of Judas (Yehudah). Excavations and surveys have revealed in a nearby cave a stunningly rich copper treasure of ritual rods. Within the boundaries of the resort – a temple with remains of burnt offerings both from Chalcolithic era, dating back to the 4thmillennium BC.

Its generous flow of water has attracted settlers and nomads over thousands of years. The name Ein Gedi is mentioned several more times in the bible: once concerning the affairs of David (yet to become a king) hiding away from King Saul, and once more in the Song of Solomon (1:14): “My beloved is unto me as a cluster of camphire in the vineyards of Ein-Gedi”. In Chronicles we are told that its previous name was ‘Hatzatzon-Tamar”. ‘Tamar’ in Hebrew describes both the palm tree and its dates.

These sources depict a stable biblical settlement in the heart of the Oasis. Jewish Roman historian Josephus Flavius gives an account of the thriving Jewish village in the first centuries BC and AD, deriving its prosperity from the secret of manufacturing the persimmon perfume. A remarkable ancient synagogue that was serving the Jewish population during the 3rdto 6thcenturies was discovered accidentally in the 1960s, and was excavated during the early 1970s. The restored synagogue is open to visitors, who are welcome to roam the impressive mosaic-floor depicting a roman style zodiac, alongside Hebrew and Aramaic inscriptions and ornaments of birds.

The name meaning ‘the fountain of the kid’, (‘kid’ being the young offspring of either a goat or an ibex) refers to the mountain goat that roams so solemnly onto the steep cliffs of the desert. Ein Gedi was originally the name of a moderate fountain in the very center of the oasis, a tiny pastoral spot that now renders its name to the whole surrounding region. The oasis includes no fewer than six springs (at least three more dried springs are known to have been flowing in earlier periods) and two big steady rivers all yielding a remarkable flow of cool, drinkable fresh water to the heart of the harsh, dry desert, brimming with the saltiest basin of water on earth: the Dead Sea.

The plain through which the two rivers run had always been very fertile for agriculture. The settlers in various times knew how to utilize the spring water for irrigation, and created terraces on the steep slopes. The green spot is home to a multitude of reptiles, birds and mammals, outnumbered today by large herds of rock-hyrax and ibex that decorate the pictorial barren rocks.

The oasis of Ein Gedi is a strip of three miles along the steep slopes of the Judean Desert curving down to meet the western coast of the Dead Sea. The lower plateau is at an elevation of 300m below sea level; while the higher slopes tower to 100m above sea level. The rivers of David and “Arugot” are dug into the mountains in a V shape, and give life to the whole region. The entire flow of all its fountains and rivers yields 3.5 million cubic meters of water per year.

The Ein Gedi field school (the first field school in Israel) was built in 1960 on the northern slopes. Since 1955, at the south end of the oasis stands Kibbutz Ein Gedi. All the public areas of the kibbutz serve as a huge Botanical Garden, with thousands of trees from all over the world. In past years the kibbutz relied mainly on agriculture, using the natural water of the oasis. Since the 1990s its main source of income comes from the well-known mineral water factory.

Being the biggest and the most impressive oasis in Israel, the Ein Gedi reserve is an attraction for hundreds of thousands of visitors annually. Many trails were blazed along the reserve; some are handicapped-accessible. Hikers from all age groups and capabilities are welcome to discover the hidden corners of the reserve’s beauty. Along the trails special pools were designated for bathing and among these, one can find the cave of “Dodim” that hides behind mild vegetation under a flowing spring, or the Hidden Waterfall that offers a cool shower on a hot day.

The abundance of water yields thriving vegetation that forms the foundation of the ecosystem of the oasis. The dominant plants are reeds and Tamarisk trees. The latter are specially suited for soil with a high salt content. In the pools frogs and toads are to be found, and occasionally one can meet friendly crabs, that hurry to hide from the visitors.

Red and blue-tailed damselflies hover among the reeds alongside wasps and birds, which include the unique Blackstart, the white crowned Wheatear, and the Tristram Starling, a small black songbird primarily responsible for the ‘soundtrack’ of the oasis.

Among the mammals one can spot the endearing golden spiny mouse, and of course the ibexes and the hyraxes. The predators are hyenas, foxes, and a single leopard, the last survivor of a small community that was the pride of the reserve for many years. But not to worry: the predators don’t come around in daytime. All the animals know that by 17:00 (summer) or 16:00 (winter) the last visitors have to leave, and the reserve is free to return to its natural pace.