At the edge of the Judean desert, sparkling like a jewel within the harsh arid dust lays Ein Gedi, Israel’s largest natural oasis. Four rivers flow year-round to provide water for this gem, a site of lush vegetation and wildlife on the shore of the Dead Sea.

But it is not only one of Israel’s most popular nature reserves; Ein Gedi is also the site of some of the region’s most fascinating history, with archeological remnants dating almost 5,000 years back.

Ein Gedi is simply a must for anyone traveling through Israel.

What does Ein Gedi mean?

The Hebrew meaning of Ein Gedi is composed of two Hebrew words: “Ein” means “eye” or “fountain (or spring)” and “gedi” means a kid or a young goat, and when you think of the many species of ibex and mountain goats in the area, this comes as no surprise.

The spring is located at approximately the middle of the western shore of the lake, at the fountain of Ain Jidy, from which Ein Gedi takes its name.

Its original name was “Hazezon Tamar” (in Hebrew: “dividing the dates”), after the palm trees surrounding the area. 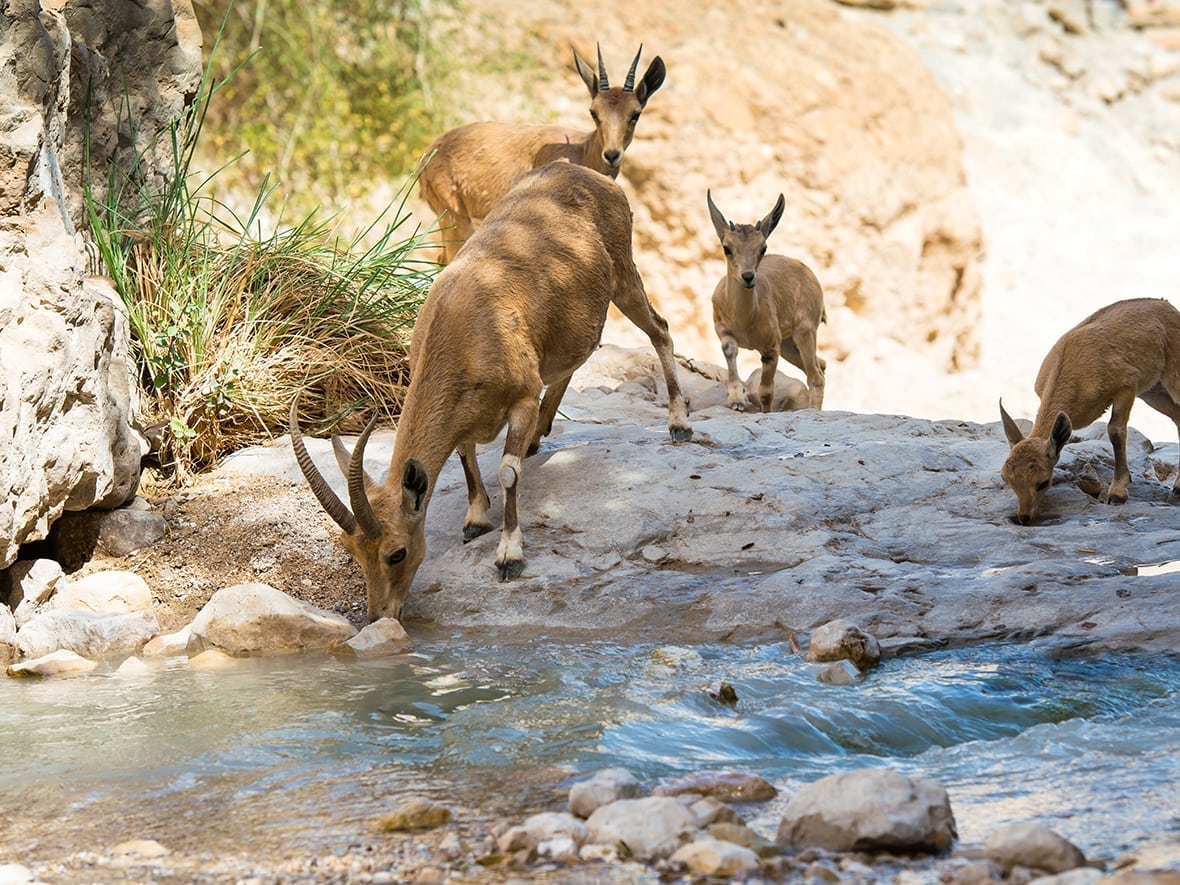 With its strategic location on the Western shore of the Dead Sea, Ein Gedi dates back some 5,000 years and was originally a fishing town and an important source of medicinal balsam. The arid desert climate has kept some of the archeological ruins well-preserved to this day, helping scientists trace its history throughout the years. 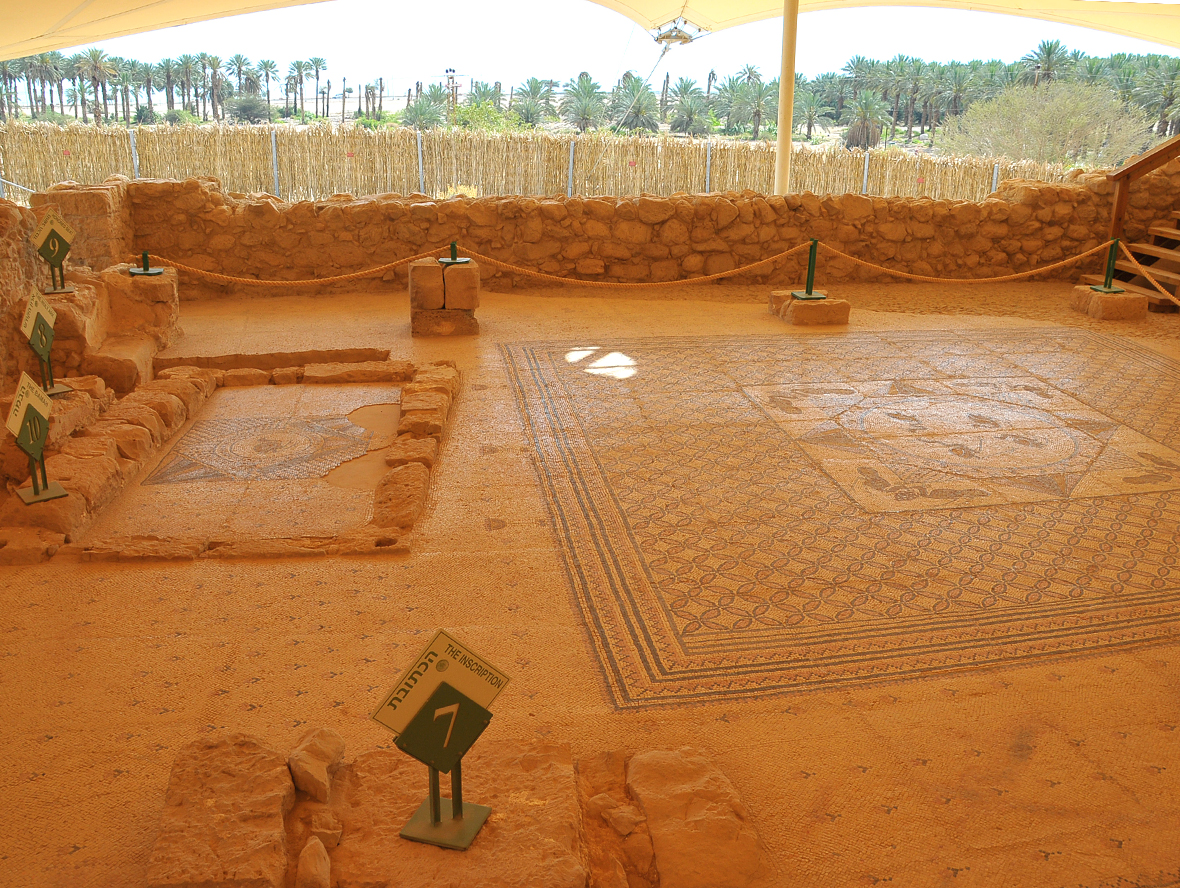 Ein Gedi in the Bible

Ein Gedi’s importance as a large source of water and desert oasis was established in the Bible. It was one of the six cities bequeathed to the Tribe of Judah, as noted in the Book of Joshua (Chapter 15): “And the uttermost cities of the Tribe of Judah… and Nibshan, and the city of Salt, and Ein Gedi… six cities with their villages.”

Its craggy rocks and mountainous surroundings also served to be an ideal hiding place for King David when he fled King Saul: “After Saul returned from pursuing the Philistines, he was told, “David is in the Desert of En Gedi.” This may also be where King David wrote several of his Psalms.

The lush vineyards in the area were also mentioned in the Song of Songs: “my beloved is to me a cluster of henna blossoms from the vineyards of Ein Gedi.” 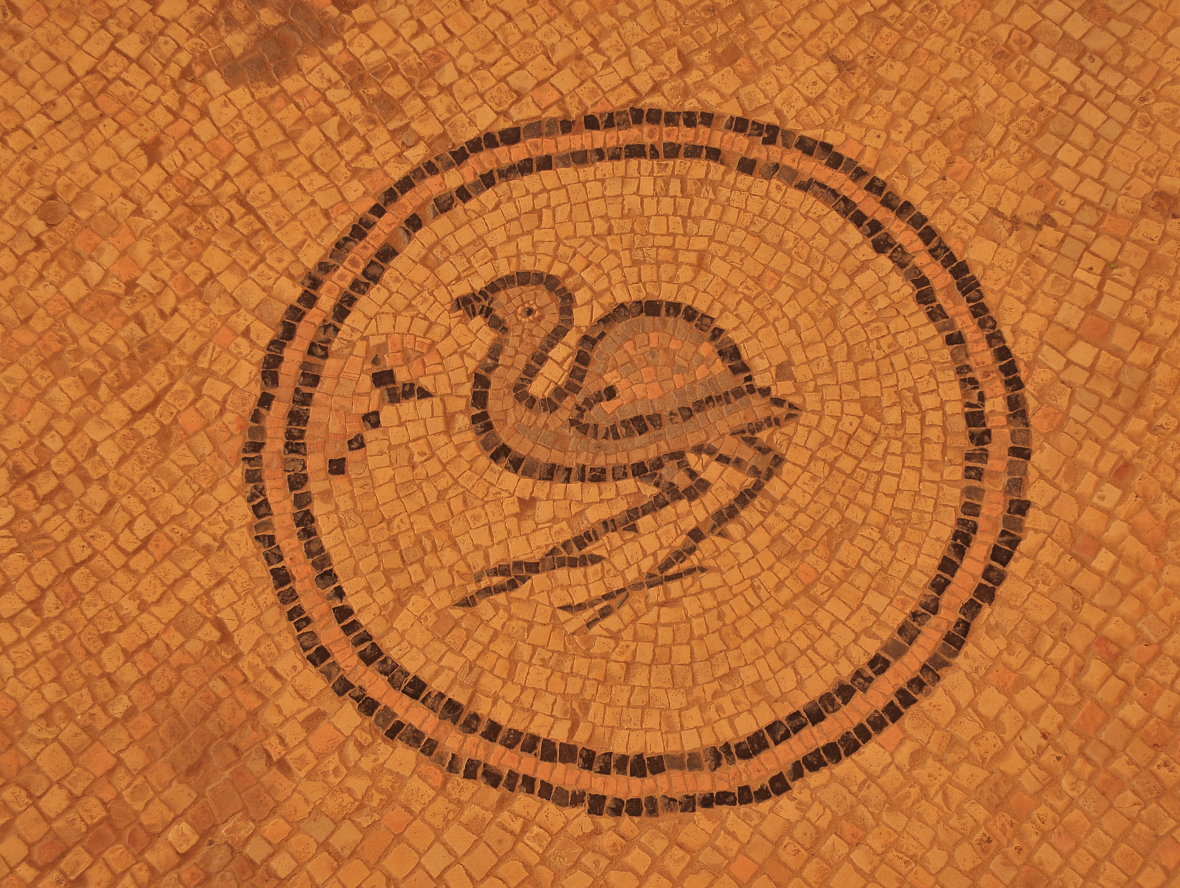 The Oasis of Ein Gedi is Israel’s largest desert oasis, with its water supply originating in four springs. Its fresh waters have made settlement possible since ancient times, dating 5,000 years back. During the Hellenistic and Roman periods, its wealth was based on its famous dates, vegetation, and the precious persimmon fruit (balsam) which was used to make perfume.

As a magical source of refreshment surrounded by harsh desert climes, it is no wonder the oasis served as an important source of culture and commerce throughout the ages – but also as a hiding place. 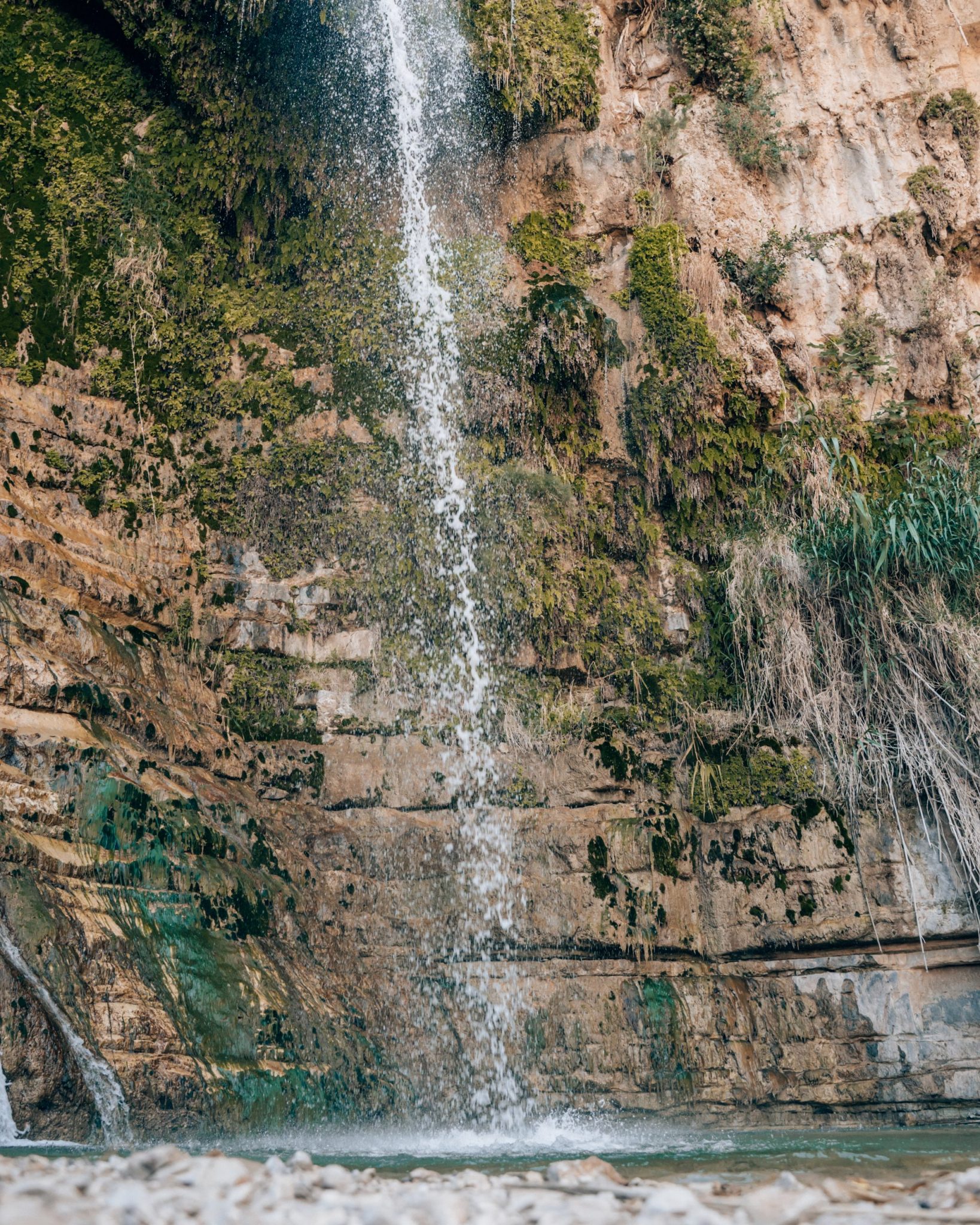 What happened at Ein Gedi?

Based on the findings of archeological excavations, Ein Gedi has always been important: during the Chalcolithic Era, a temple was built and it served as a ritual center for the nomadic tribes of the area. During the Biblical period, it was an important city and served as sanctuary for King David when he fled King Saul. The first permanent village, Tel Goren, expanded and grew throughout the Persian period, the Hasmonean and Herodian periods (5000 BCE – 1st century CE).

Ein Gedi was destroyed and abandoned during the first Jewish rebellion against Rome (approx. 70 CE). 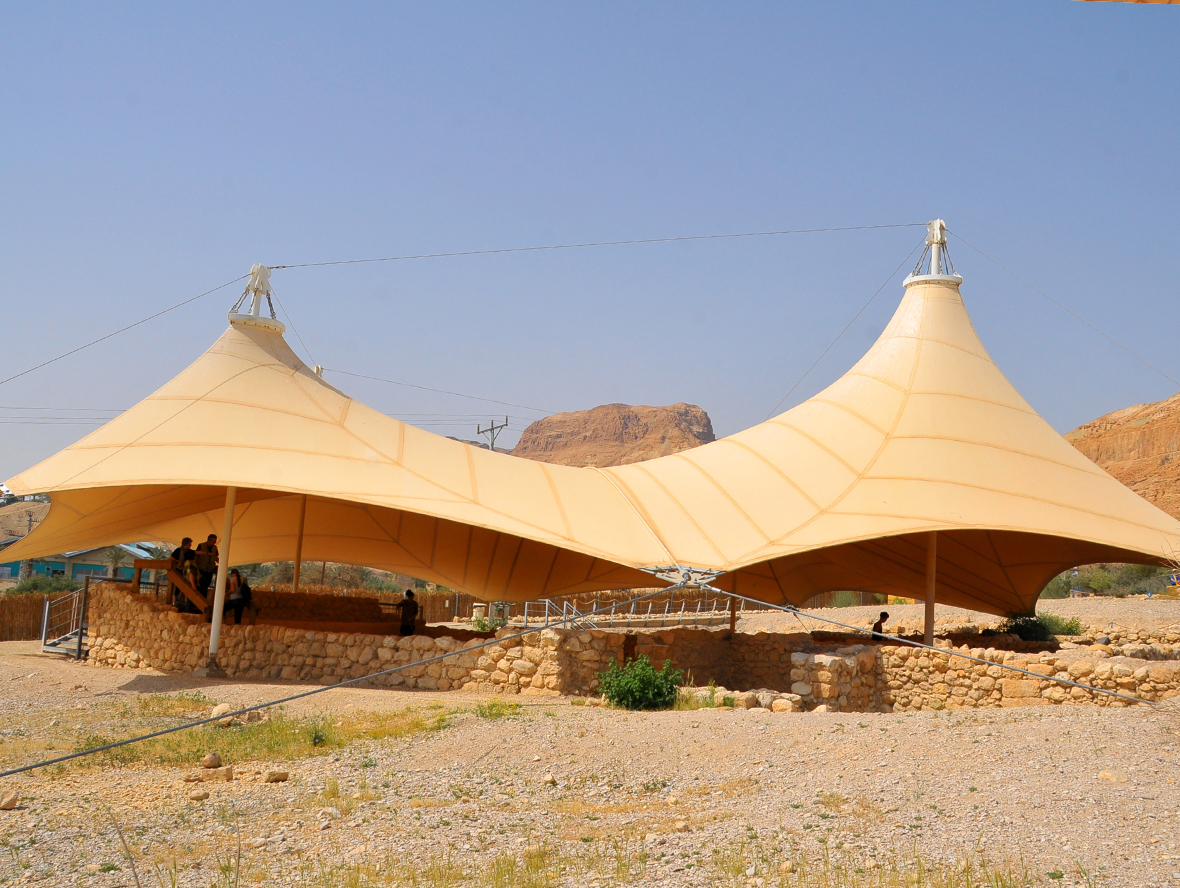 Excavations since the 1960’s have revealed a wealth of findings in the area, including remains of a temple from the Chalcolithic Era, ruins of the Tel Goren village, including water installations, stone cells, and the Ein Gedi Synagogue dating back to the Roman-Byzantine area. 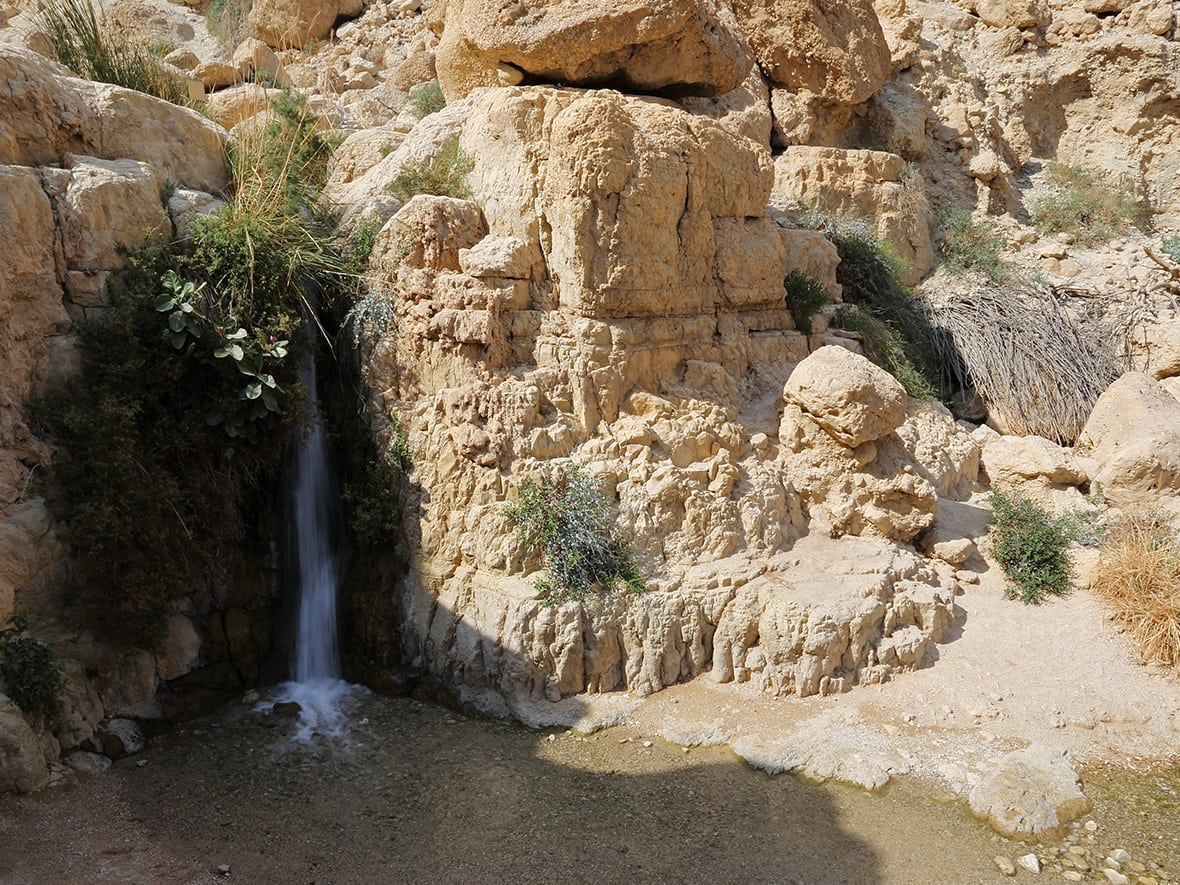 The Ein Gedi Nature Reserve, known as one of the most popular nature sites in Israel, is Israel’s biggest oasis and features enjoyable hiking trails, breathtaking views, waterfalls, wildlife (ibex and hydraxes are easy to spot), and streams that flow year-round. It’s a must-visit when traveling in Israel, mainly due to the unique combination of desert and springs. Search for the hidden waterfalls in Arugot Stream or explore the caves where King David hid from Saul. 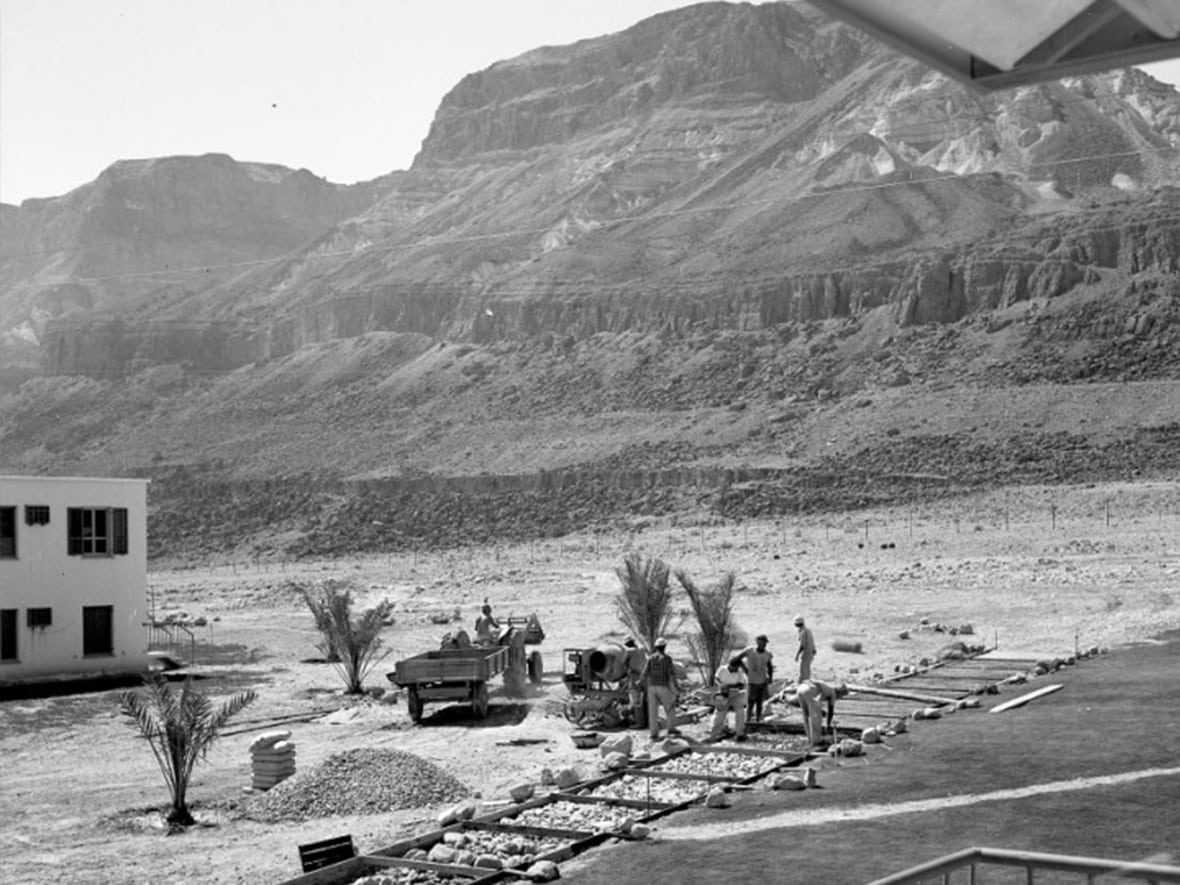 Kibbutz Ein Gedi was founded in 1953. At the time of its establishment, it was completely isolated in the desert, the nearest town several hours away.

In the late 1960’s, new roads were paved to connect the kibbutz to Israel and allow for its continued development. Kibbutz Ein Gedi is a collective community that is economically based on tourism and agriculture. In 1997, it established Ein Gedi Mineral Water, a facility to bottle the water of the Ein Gedi Spring.

In addition, the Kibbutz operates a major botanical garden, a hotel, and a well-known spa.

The Dead Sea is world-famous for its health benefits, due to the high mineral content of the water and mud within. Local spas and hot springs offer treatments that make the most of these natural benefits. The Synergy Spa, located within the kibbutz, offers mud wraps, massages, and a variety of other treatments. 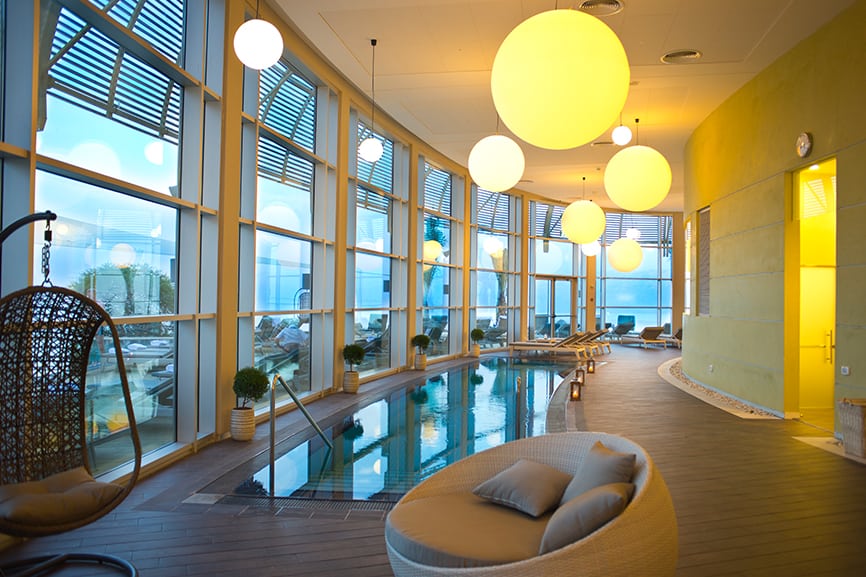 With over 900 different types of trees and plants from several continents around the world, Ein Gedi Botanical Gardens have claimed their rightful place as part of the Botanic Gardens Conservation International initiative. Flora fanatics will love the variety of unusual trees from various tropical regions around the world, as well as rare local species and the cactus garden, which includes over 1000 types of cactus. 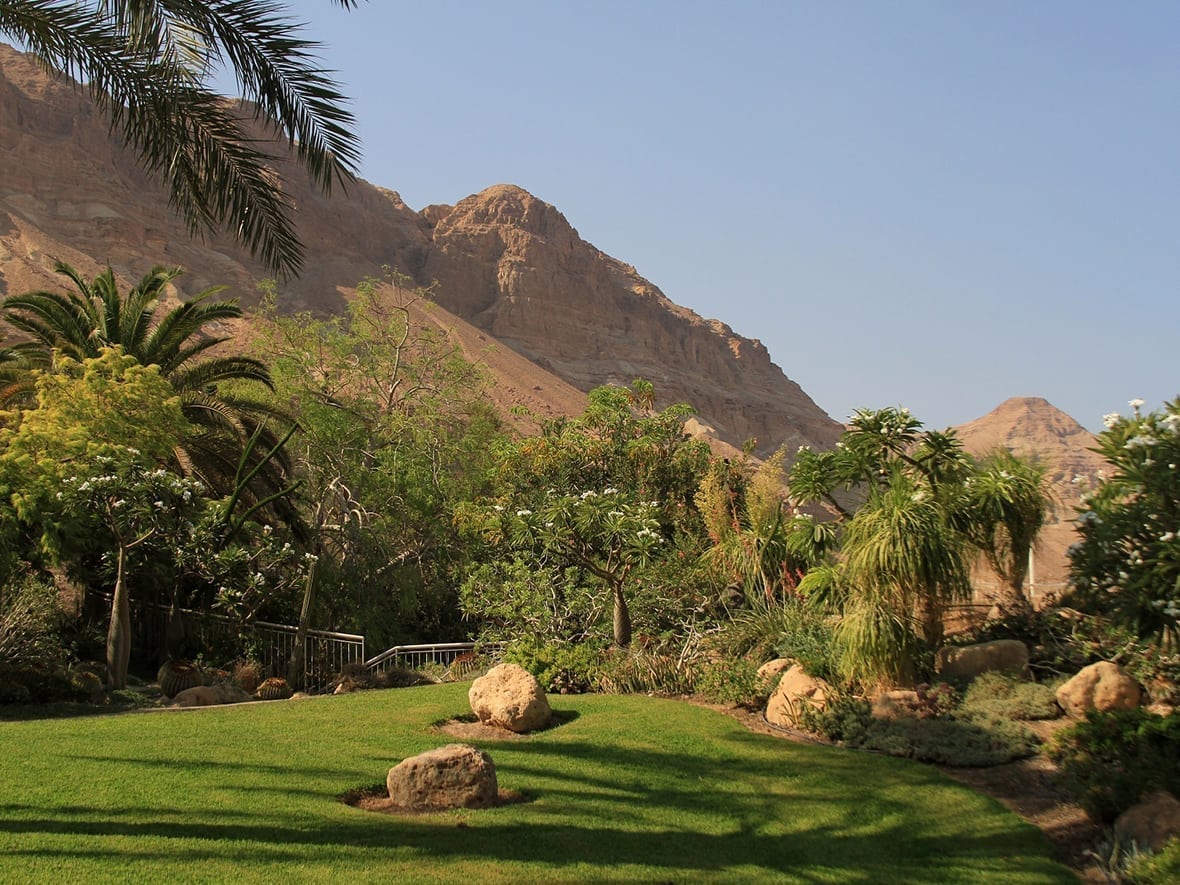 Located at the breathtaking point where desert and sea converge, the Ein Gedi Hotel is surrounded by natural wonders – the Dead Sea on one side, and the nature reserve on the other. The hotel has been offering travelers a respite and an experience of wellness since it was initiated by seven tourists in the early 1960’s. The hotel offers a range of activities and facilities for visitors to the region, including the Synergy spa, trips in the area, a swimming pool, and more. 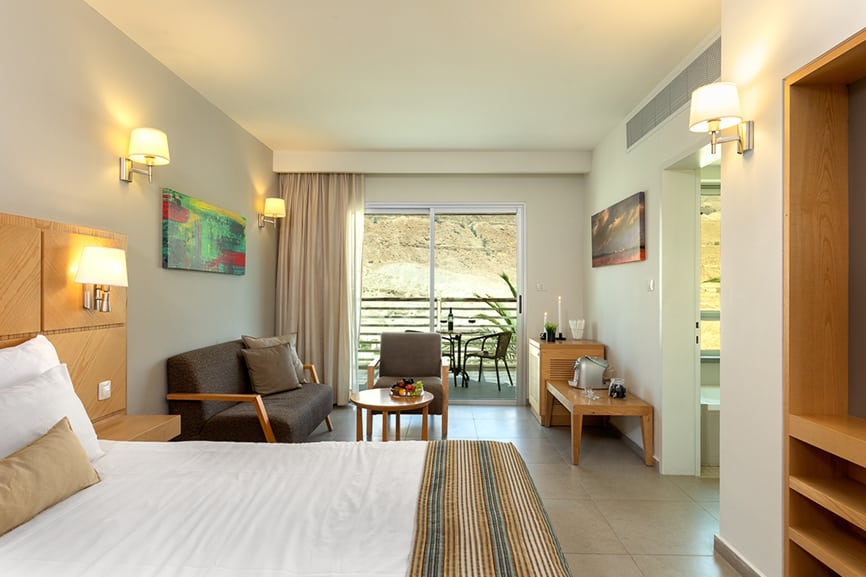 If you prefer simpler forms of accommodation, there are a few options for budget travelers looking to enjoy the Ein Gedi area.

The HI Ein Gedi Youth Hostel is clean and welcoming and is a good choice for budget travelers.

For a night under the stars, the Ein Gedi Campground is conveniently located only 600 meters from the Botanical Gardens, where you can pitch your tent and connect to the sounds of the desert. It is a great location for anyone visiting Masada, the Dead Sea and the entire region.

Can you swim at Ein Gedi?

Swimming in the Dead Sea is an experience you wouldn’t want to miss. The high saline content of the water causes everything to float, giving you an experience of weightlessness some have compared to floating in space.

Although the Ein Gedi Beach on the North Shore is closed due to sinkholes, you won’t have to miss out on a swim. Head over to the Ein Gedi Hot Springs, where you can enjoy not only exclusive access to its private beach, but also a vast array of activity for the entire family, including a swimming pool and a giant wellness complex where visitors can dip in sulfur pools, or indulge in a selection of therapies based on the Dead Sea’s natural resources.

With its elaborate history and archeological ruins, its beautiful views, and a wonderful contrast between desert climates and refreshing springs, Ein Gedi has earned its rightful place as one of Israel’s top tourist attractions. Come visit Israel’s largest oasis and enjoy a hike, a swim, or just a day at the beach – all only a 2-hour drive from central Israel.