The History of the Dead Sea War Scroll: Ancient Myth or Military Manual?

Most people have heard of the Dead Sea Scrolls. The scrolls were discovered in caves near the shores of the famed sea. The War Scroll is one of the better known individual scrolls, and it contains detailed descriptions of war and military strategy.

Is it possible that the authors wrote the scroll as a military manual? Or, did they write about the End of Days? The history of the manuscript may reveal its true purpose.

What Are the Dead Sea Scrolls?

The War Scroll is one of seven ancient Jewish manuscripts found in 1947. The scrolls were discovered by Bedouin shepherds in the Qumran Caves on the northern shore of the Dead Sea.

Due to the location of the discovery, the scrolls are collectively known as the Dead Sea Scrolls or the Qumran Caves Scrolls.

Written on papyrus and stored in earthenware jars, the scrolls were relatively well-preserved, allowing scholars to decipher most of the surviving texts. As scrolls were likely written during the last two centuries BCE.

Historians have linked the fragments to a Jewish sect called the Essenes during the Second Temple period. However, it is also possible that the Essenes collected and preserved the manuscripts, instead of authoring them.

The content of the manuscripts includes some of the oldest surviving copies of religious texts. Several of the original Dead Sea Scrolls copy entire Books from the Hebrew Bible, including the Books of Isaiah, Genesis, Leviticus, and Deuteronomy.

What Is the War Scroll? 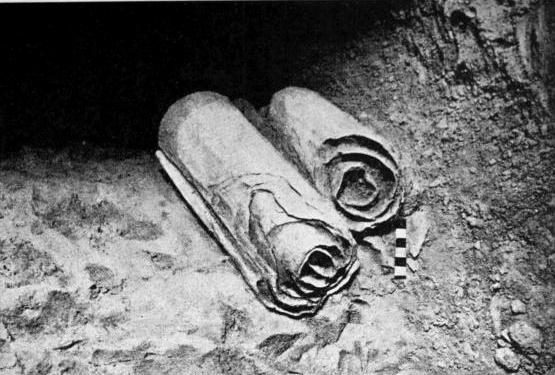 After summarizing the wars, the document goes on to describe the various inscriptions on trumpets, banners, and equipment. It also goes into detail discussing the wide array of military maneuvers and strategies used by both sides.

Sons of Light vs the Sons of Darkness – Essenes vs Romans?

Scholars remain unsure about the historical context of the Dead Sea War Scroll. Does it contain works of ancient mythology or a real description of military strategy?

During the War against the Kittim, the sons of Judah, Levi, Benjamin, and the exiled people of the desert fight the Sons of Darkness.

The Kittim may represent the Romans, the Seleucid Greeks, or the Macedonians. The Seleucid Dynasty ruled the region between 312 BCE and 63 BCE, followed by the Romans.

The original authors may have written the Qumran War Scroll as a guideline for the eventual revolt against the Romans or as a Biblical prophecy. Members of the Essenes Community believed they were living at the End of Days and described themselves as the Sons of Light and all enemies as the Sons of Darkness.

While the details of the scroll may remain a mystery, historians agree that it is likely based on real political tensions of the time and the community’s beliefs at the End of Days and the final Day of Judgment.

How Can You View the War Scroll?

The Dead Sea War Scroll and other fragments are on display at the Israel Museum, in the Shrine of the Book wing.

After the initial discovery in 1947, many more manuscripts were found in and around the Qumran Caves. Almost 950 manuscripts were uncovered and changed hands multiple times. Today, almost all the discovered Dead Sea Scrolls, including the War Scroll, are owned by Israel and housed in the Shrine of the Book in Jerusalem.

The Shrine also holds other important Biblical texts, including the Aleppo Codex, providing a historical journey through the evolution of the Hebrew Bible.

To reach the Israel Museum, travel to the Givat Ram neighborhood in central Jerusalem, next to the Israeli Parliament and other key government offices. The museum offers free public tours with the admission fee. The tours last about two hours and require reservations.

During your trip, you can also visit the caves where the scrolls were uncovered. Qumran National Park is about 80 minutes away from the center of Jerusalem via bus or car, located near the northern shore of the Dead Sea.