Home » Articles & Tips » Interesting Facts » Swimming in the Dead Sea, Is it Safe?

Swimming in the Dead Sea, Is it Safe?

The Dead Sea certainly has an intimidating name—downright morbid, really. But is the Dead Sea dangerous to human beings, all things considered?

The short answer is that, like any other body of water, this mighty salt lake of the Jordan Rift Valley poses a potential risk to swimmers, but not to any sort of extreme degree. Keep in mind that the Dead Sea’s been a spa-style destination for millennia: Every year thousands of tourists from all over the world follow in the footsteps of Roman royalty and kick back in the plentiful seaside resorts, enjoying mud treatments and lazy steeps in the mineral-rich waters.

Visitors who treat the Dead Sea with respect, abide by safety regulations and exercise basic caution usually have an utterly wonderful time soaking up the sunshine, the scenery, and the incredible history on tap here. To prepare you for your visit, let’s run down some of the potential dangers—and some practical tips for minimizing them!

As a closed basin occupying the lowest terrestrial depression on the planet, the Dead Sea’s unique characteristics—prodigious sunshine but reduced UV radiation, waters concentrated with natural minerals—explain much of its appeal. They also create an extreme environment of the sort that precludes most organisms from prospering in these waters: The Dead Sea gets its name because only a few hardy life forms, mainly specially evolved bacteria and algae, can survive here.

That environment demands a little caution on the part of sunbathers and swimmers. Let’s take a look at some of the simple issues you want to be aware of in order to stay happy and comfortable along the Dead Sea’s shores and out on its balmy surface.

When first entering the Dead Sea, give yourself some time to get used to the odd (and pleasurable) feeling: Really, you’re not swimming per se, but rather floating, and that can take a while to adjust to. Find a comfortable rafting-on-your-back position, and keep an eye on your balance. If you feel dizzy or otherwise uncomfortable, don’t push your limits: Head for shore.

The Dead Sea’s warm year-round, and its summertime temperatures can be impressive indeed: In July and August, the mercury commonly soars to 39 degrees Celsius (102.2 degrees Fahrenheit) or above, and record temperatures have hit 47C (116.6F). To combat the heat in the Dead Sea, it’s important to stay hydrated and put in plenty of quality time in the shade. You don’t want heat- or sunstroke marring your leisure time, after all.

Because it’s an endorheic lake—one in which water leaves only by evaporation, not outflow—the Dead Sea’s saltier than the ocean: Its average salt concentration’s in the vicinity of 34 percent. This hypersaline quality accounts for the famous buoyancy anyone experiences taking a dip in this arid basin. It also means you can suffer from some unpleasant irritation if you let the water into your eyes, throat, or any cuts or scrapes you might have. Don’t put your face underwater, and stay out of the Sea if you do have any healing wounds; that includes the inevitable nicks of shaving.

Experts recommend limiting a Dead Sea swim to 20 minutes or less, as prolonged immersion in such salty water can cause dehydration, electrolyte imbalance, and other problems. Follow a rhythm of occasional brief dips interspersed with onshore relaxation. 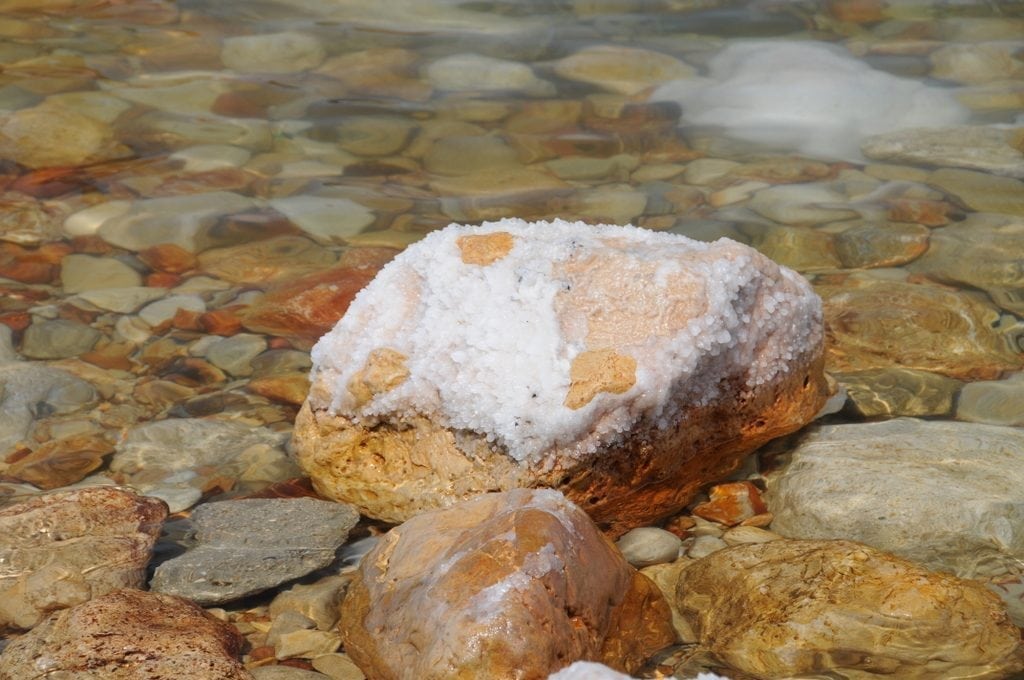 Many Dead Sea tourists go barefoot, but it’s a good idea to wear water shoes for strolling along the shore or taking a swim. The shoreline rocks and salty crust can be abrasive, as can the lake bottom itself. In light of the previous note, it goes without saying that a sliced foot does not feel good in the Dead Sea.

Luckily, for those of us who might not enjoy watching every step, the majority of Dead Sea Spa hotels have salt pools filled with mineral-rich Dead Sea water, so everyone can enjoy incredible health benefits and amazing floating experience from the comfort of your hotel.

Can You Drown in the Dead Sea?

We’ve covered some avoidable annoyances, but what about the serious dangers of swimming in the Sea? Many assume that drowning would be a tall order in these waters, given that you naturally float in the water.

But that very buoyancy can occasionally cause problems if you’re incautious or somehow physically incapacitated. If you happen to flip over onto your stomach, it can sometimes be challenging to right yourself because you can’t plunge your feet deep enough to go vertical. This can be a challenge even in the Dead Sea shallows because the dense water often prevents you from getting a foothold on the bottom.

Most swimmers in good condition can avoid these particular dire straits, and Dead Sea lifeguards keep a keen eye out for any bathers who find themselves floundering.

Apart from some risks and inconveniences connected directly to the Dead Sea, you should also be aware of the dangers related to the region itself. In recent decades, hundreds of sinkholes have opened up along the margin of the Dead Sea, especially its western shores. Scientists believe these are the result of lowering lake levels due to water diversions, which allows groundwater to rise to the surface and dissolve salt deposits to form subterranean cavities.

The best way to avoid sinkholes is to abide by any current closures and safety advice issued by authorities and to stick to those beaches developed for tourism.

A Fantastic and One-of-a-Kind Destination

The Dead Sea does pose some risks, just like any other lake or sea on Earth, but it’s still overall a very safe destination. The warm, super-salty water makes a delightful medium to float around in a while, but you need to stay aware of your surroundings and your own body’s comfort level so as to avoid adverse reactions and the danger of drowning.

Be aware of the relatively minor dangers of the Dead Sea, and you’ll have the confidence to fully enjoy the pleasurable embrace an epic ambiance of these fabled waters!