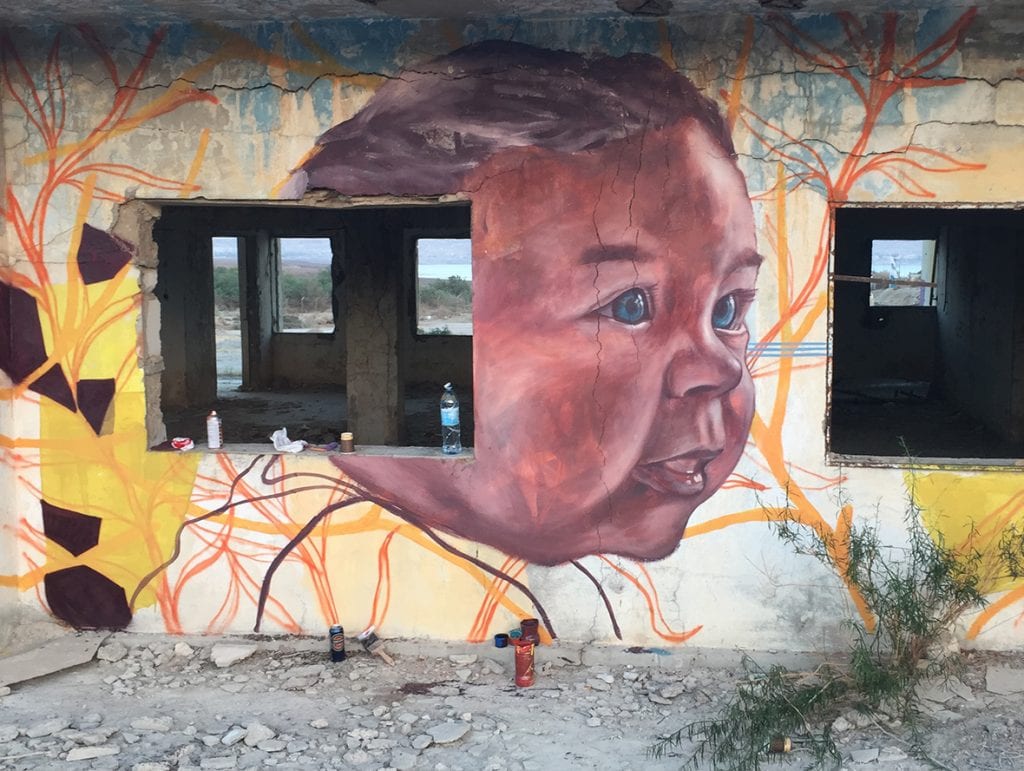 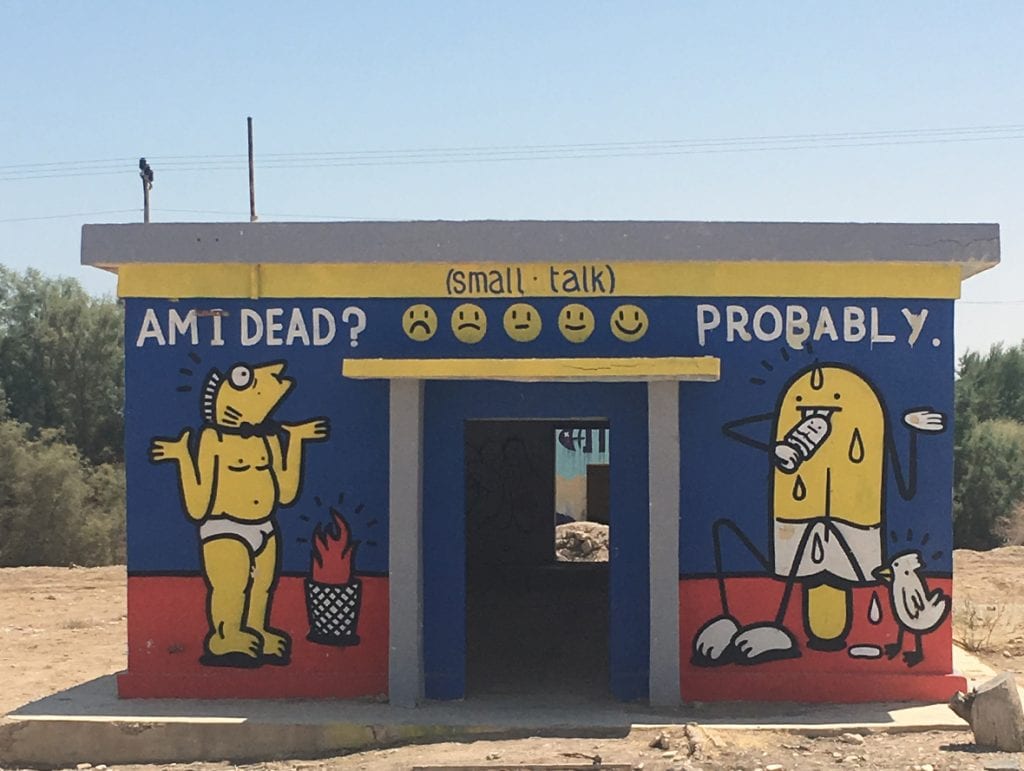 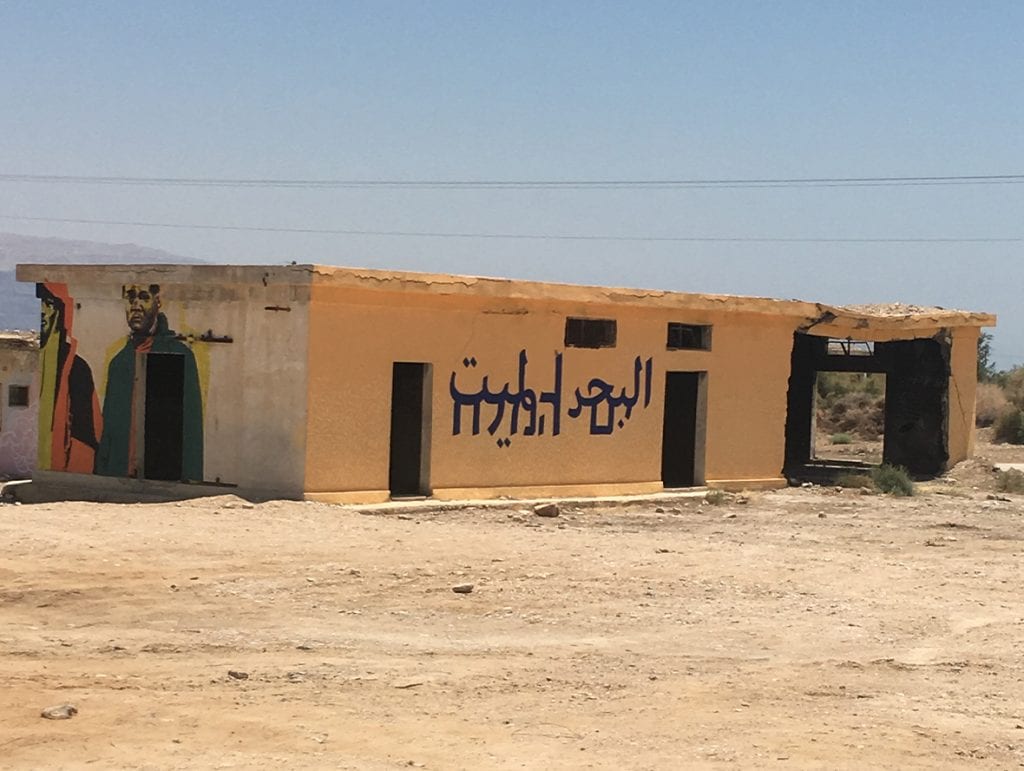 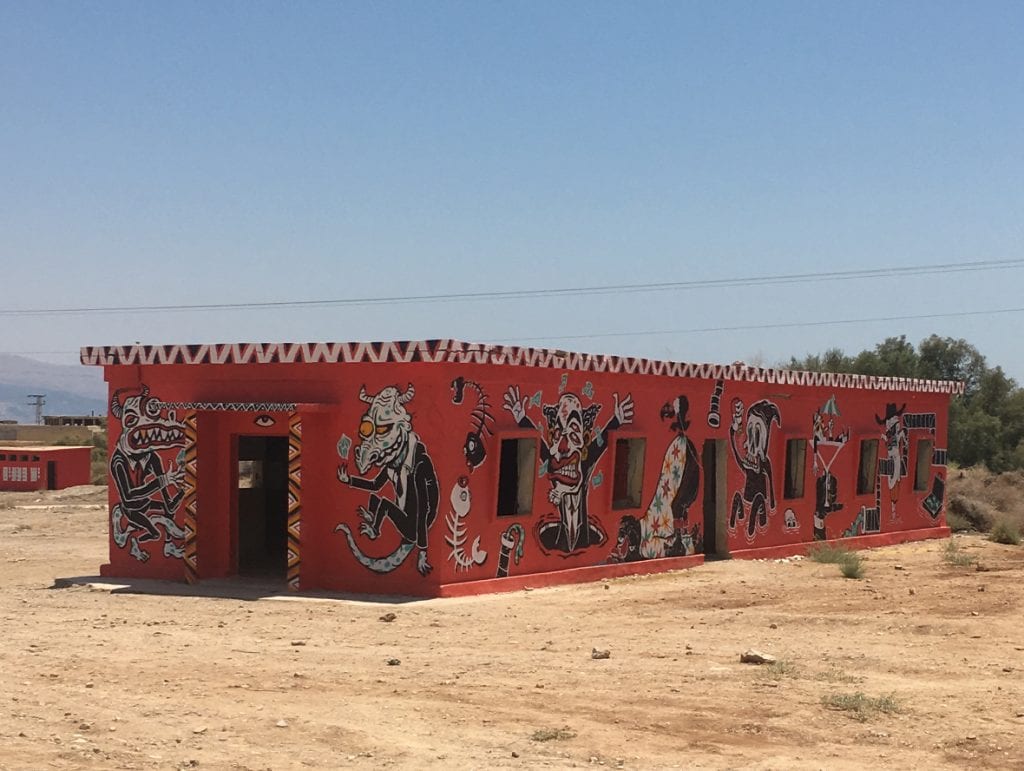 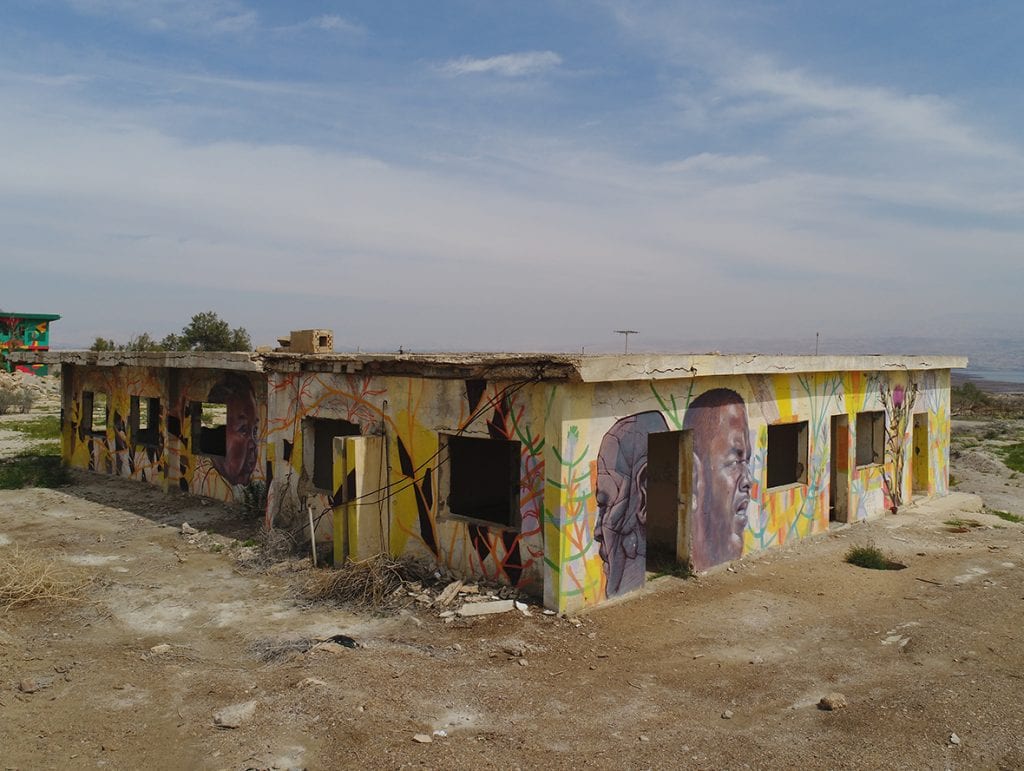 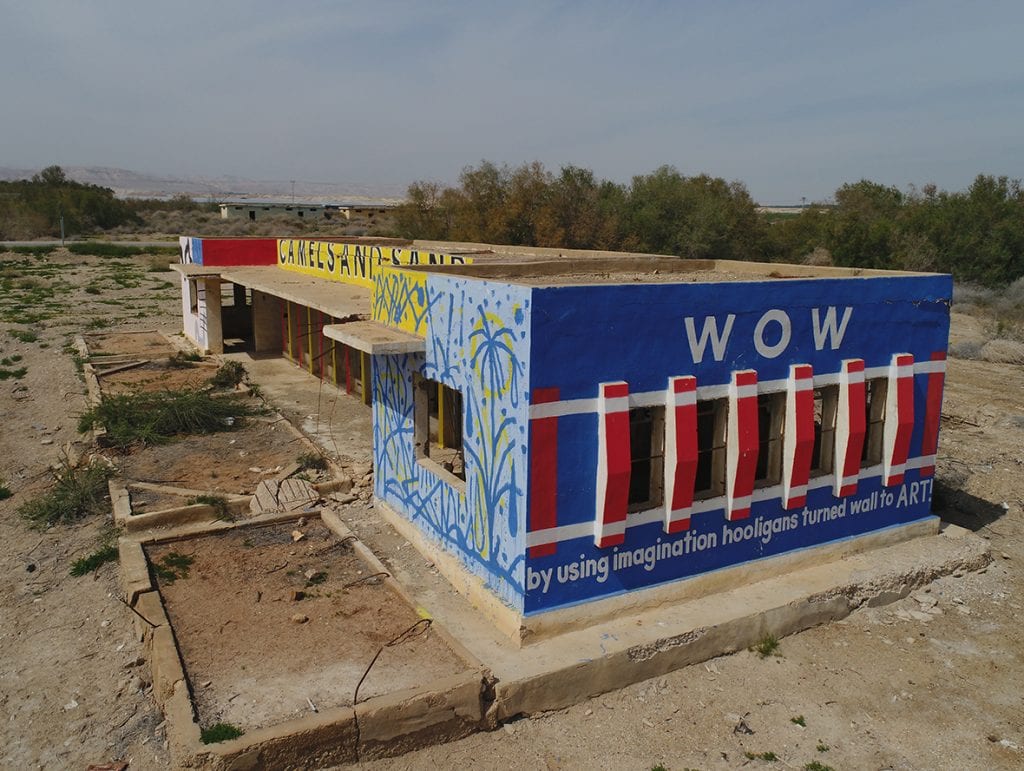 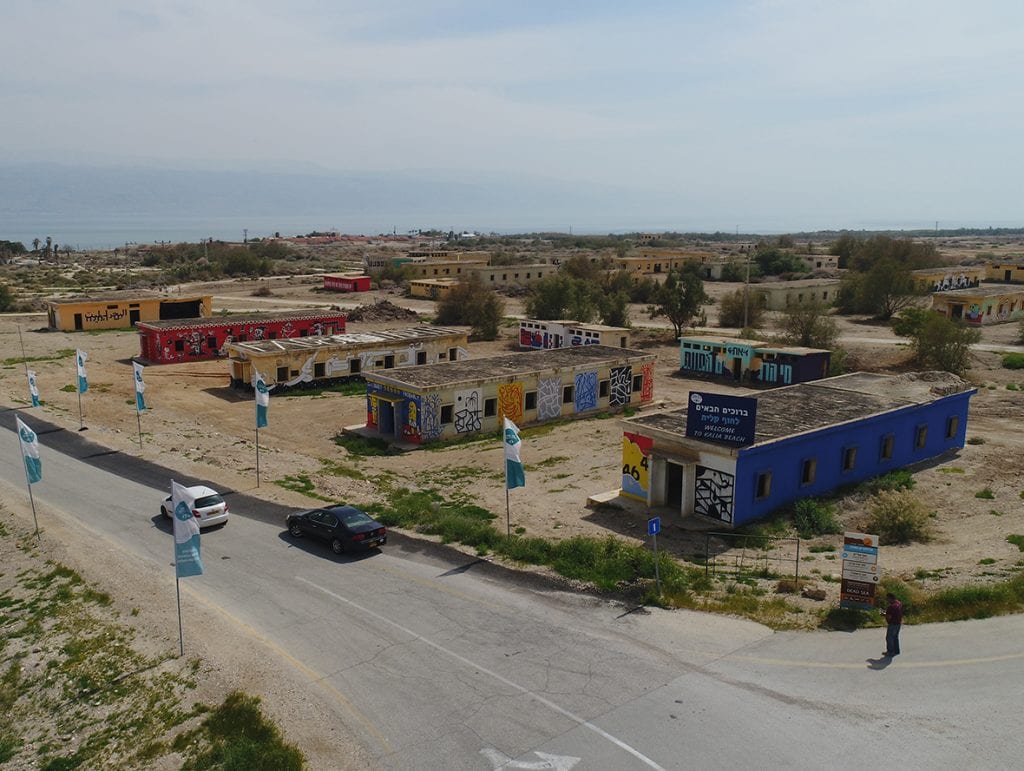 Are you planning a trip to the Dead Sea region?

The Dead Sea remains one of the most visited bodies of water in the world.

For thousands of years, people have flocked to the salty water for its rejuvenating properties. Millions of visitors now stay at the various seaside resorts lining the shores.

Of course, there is much more to see besides seaside hotels and resorts.

Along with world-known Dead Sea attractions, such as Masada, Ein Gedi, and Qumran Caves, there is a new one to add to your “must see” list…

Gallery – 430 (Gallery Minus 430) is one of the latest reasons to visit the Dead Sea region.

Israeli and foreign artists have contributed to the ongoing project. It is comprised of large wall paintings on the old deserted buildings lining the Northern Shores.

The name of the gallery comes from the elevation of the sea. The shores and surface of the Dead Sea are about 430 meters below sea level, the lowest point of elevation on land.

Unfortunately, the landlocked nature of the lake has led to decreased sea levels and surface area.

The Dead Sea is drying out.

We conceived Gallery Minus 430 as a major art project dedicated to promoting awareness of the issues facing the Dead Sea.

The Dead Sea is dying rapidly.

Various industrial organizations and research groups have proposed solutions over the past decade.

The Dead Sea Gallery was founded in 2018 to help bring more attention to the ill-fated Dead Sea. All artists are volunteers as this project includes no governmental contributions.

To visit Gallery Minus 430, travel to Kayla Beach. It is the northernmost beach in the Dead Sea and just a 30-minute ride from Jerusalem.

The gallery consists of original murals painted on the walls of old buildings. Abandoned decades ago, the buildings belong to a former Jordanian military base.

The bland, dilapidated structures have come to life thanks to the inspiring contributions of artists from around the globe. Contributors arrived from as far away as Mexico and Uruguay.

The art of the Dead Sea covers a wide range of styles, from whimsical to thought-provoking. You can view walls covered in giant animals, scary cartoons, or bandages. However, there is a unified theme.

The Dead Sea Gallery includes original artwork inspired by at least one of the following:

The third session takes place this October 18 to 20.

Artists from Greece, Uruguay, and Israel will create 13 new murals to help raise awareness regarding the shrinking sea.

Gallery Minus 430 remains open to the public 24/7. You can visit the murals at Kayla Beach at any time.

Come see the Dead Sea Gallery for yourself and then help spread awareness of the project and the state of the Dead Sea.