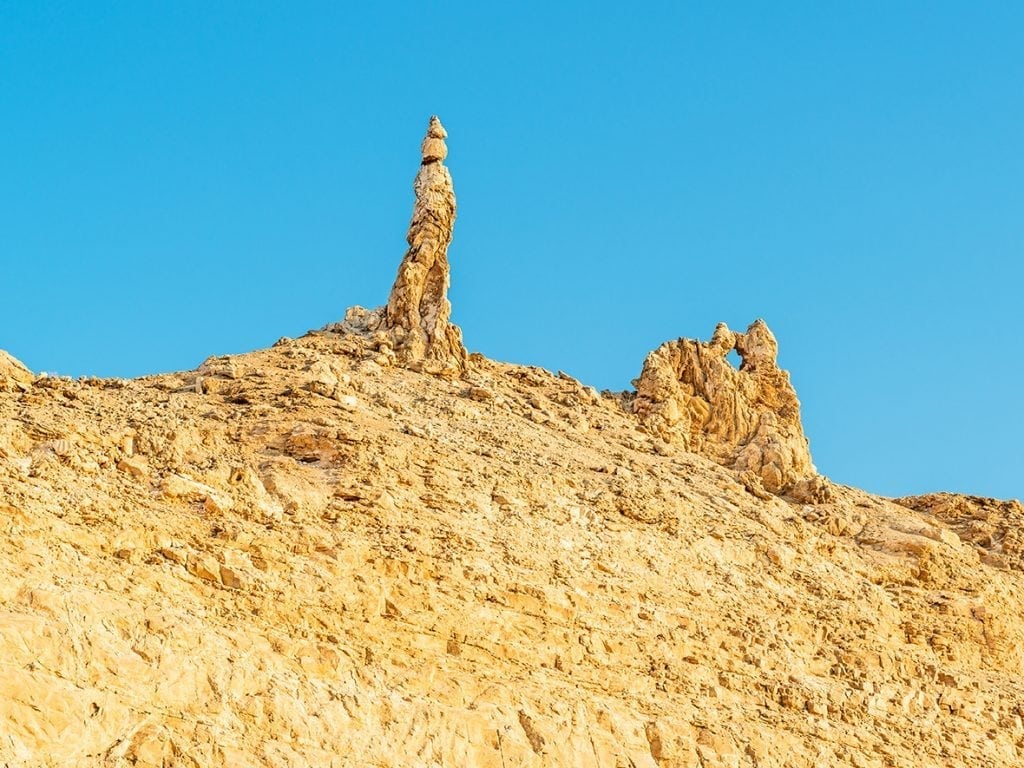 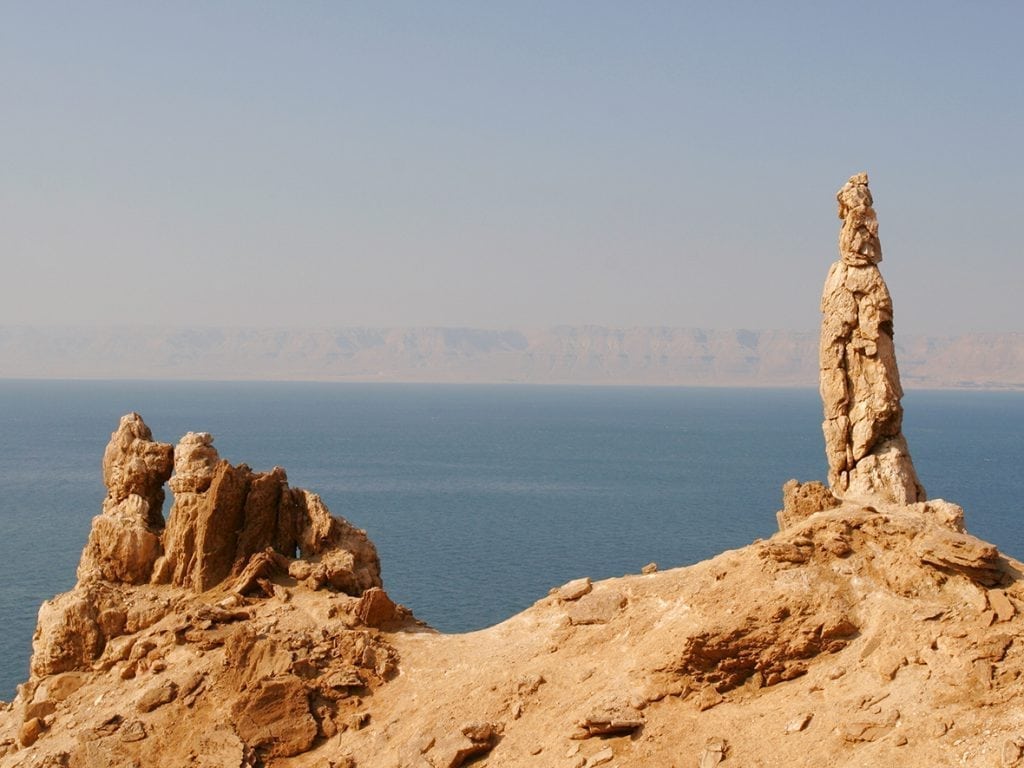 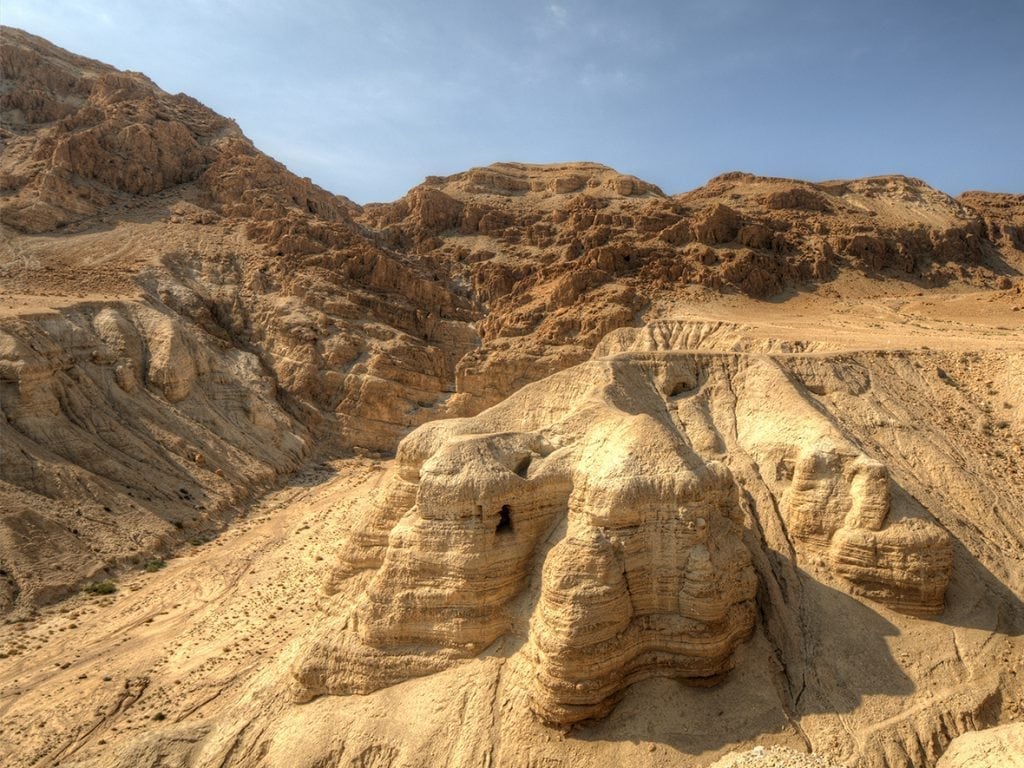 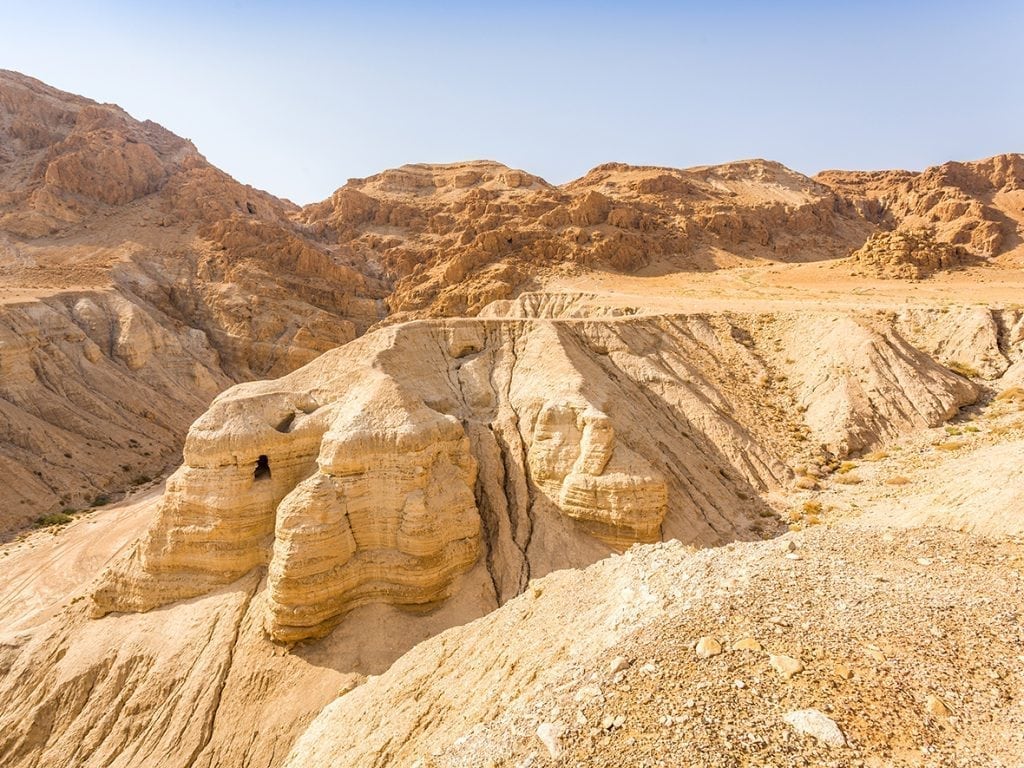 The name ‘Sodom’ is mentioned in the book of Genesis concerning the city of sinners that Lot, Abraham’s nephew, had to escape from after protecting his angel-guests from a wrathful mob. The cities of Sodom and Gomorrah were entirely destroyed by Divine Power and this mountain was there to observe the scene.

Mount Sodom is located to the west of the southern basin of the Dead Sea, and is an extraordinary geological phenomenon: apart from some thin layers of silt and marl it is made entirely of salt. During the evaporation of the previous stages of the Dead Sea, tons of salt and other minerals were deposited within the steep shoulders of the seabed.

Over the years salt accumulated to a layer of 4km height, on top of which eroded rocks and other minerals were deposited. The underground heat had melted the salt, and the weight of the rocks above creates a pressure that forces the melted salt up along the sides. The mountain is an outcome of this massive force, and it keeps rising 1cm per year.

Mount Sodom is 11km long and approximately 2km wide. The mountain top is 200m above the Dead Sea and reaches a height of 190m below sea level. Since the surface soil is made of more than 95% salt, no plant can grow on the mountain. This creates a moon-like landscape. Contrary to any other rock, the salt dissolves rapidly in water. Erosion and creation of underground cavities are more than 50 times faster than in limestone or dolomite.

The “Malch’am” (The Israeli Center for Caves Research) Cave beneath Mount Sodom is the longest known cave in Israel, and the longest single natural salt cave in the world. It is 5,500m long and is full of breath-taking salt stalactites, with endless vertical and horizontal volumes.

Until the 2000’s a number of spectacular caves were open to the public, such as ‘The Colonel’s Cave’ and ‘The Flour Cave’ but the salt is quick and easy to collapse, such that following a few minor events of rock collapse, the caves were closed to visitors for safety reasons.

On the other hand, it is safe to hike the mountain and visit its moon-like valleys. An interesting short hike links the top of the mountain with the old factory workers accommodations of the Dead Sea Works. It is called ‘The Fish Trail’. The name comes from a special form of rock that can be found in the middle of the slope, where fossilized skeletons of fish can be found within schist layers, a proof that the Dead Sea area was once alive.

Services of bike-rental or Jeep-rides are available and can take visitors to the heart of the mountain to view some of its unusual phenomena. Some caves cut the mountain from side to side and supply cool draughts of air in the desert heat. Outside one of these natural a/c tunnels a cinema was built in the 1930s for the British officers. Other wonders include smooth valleys with picturesque zebra ornaments, and natural sculptures, modeled by rain and wind.